Brown was born Aja Lena Clinkscale in Altadena, California, to mother Brenda Jackson, who worked at the Jet Propulsion Laboratory at California Institute of Technology (Caltech) and raised the family as a single mother.[1] Brown’s parents divorced when she was young.[3] She has a fraternal twin brother named Jonathan Clinkscale, who played football at the University of Wisconsin–Madison.[5][6] Brown’s mother grew up in East Compton.[2][7]

In 2000, Brown graduated from John Muir High School in Pasadena, where she was senior class president and played varsity volleyball.[3][5]

In 2004, Brown graduated from University of Southern California, where she received a full academic scholarship, with a bachelor’s degree in Policy, Planning & Development that included public policy, urban planning and development. In 2005, she earned a master’s degree in Master of Planning & Development, which included urban planning with a concentration in economic development.[8]The subject of her master’s thesis was an analysis of the 2004 failed development of a Walmart supercenter in Inglewood.[3]

In 2006, Brown began working for the City of Inglewood, California as an Urban Planner. In 2007, she served a term as a Planning Commissioner for the City of Pasadena, then resigned in 2009 to join Compton’s Redevelopment Agency as a Redevelopment Project Manager, focusing her efforts on revitalizing the emergent City of Compton. She was responsible for creating community benefits legislation, initiating community-led downtown revitalization action committees, overseeing the Agency’s urban planning and economic development initiatives. Brown also created and implemented Compton’s Apprentice Program designed to create jobs for local residents on city-funded or assisted capital improvement projects.[9]

In 2011, Brown co-founded the Urban Vision Community Development Corporation, a non-profit organization in Compton dedicated to community economic and youth development. Brown has also developed several re-branding programs that have achieved success in various cities, and she was awarded the “Best 2012 Communicator Design Award” for her “Yes!” campaign for the City of Compton. She has been instrumental in marketing Compton’s buyer’s program for first-time home buyers, as well as programs to attract expertise in land use and transportation.[2][10] 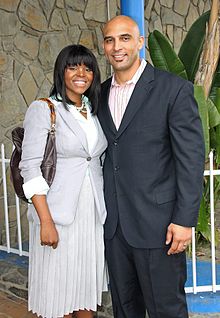 Having worked as a city employee for Compton, Brown decided in October 2012 to introduce what she called her “New Vision for Compton”. A newcomer to politics, she defeated 12 candidates, including former mayor Omar Bradley and the incumbent mayor Eric J. Perrodin, to become the youngest mayor of Compton at age 31.[2][10]

Mayor Brown has launched a “12-Point Plan” designed to strategically advance the city of Compton. During Brown’s tenure as a city employee, she recognized that the essential components needed to foster a healthy, thriving city were either outdated or non-existent. Addressing existing problems on multiple fronts, including youth development, infrastructure, working with educational coalitions and economic development, she says she has made her “12-Point Plan” accessible for the residents to follow along with the progress of the city.[11]

Decrease in violence and crimeEdit

In 2014, Brown began reaching out to Compton Bloods and Crips gang leaders through former members to negotiate peace. She uses conflict mitigation instead of heavy policing. Since the gangs started regular meetings, violent activity and crime was reduced by about 65 percent compared to the all-time high some 25 years ago.[12][13]